In the Pursuit of the Real Food of Yesteryear

I grew up in a typical suburban semi on the edge of town with a very long garden backing onto open fields with cows and horses and a large orchard. 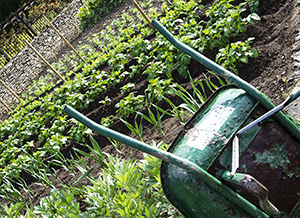 Fresh “local” food was an everyday occurrence for us, especially when we got our first freezer and it could be stored all year around. I can remember many sunny evenings sat with my dad and sister on the back step shelling peas and broad beans and trimming French beans for the pot or freezer.

The cows over the wall were a mixed herd of milking cows and young steers raised for the table. You could watch the matronly cows on silent cue shuffle off in gentle, unhurried order to the milking parlour and see the young cattle grow each day to be found missing several months later. 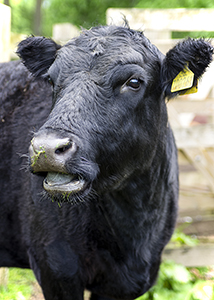 We were close to our food. We even had a local family run butcher deliver three times a week, a baker and milkman everyday: We knew their names and they knew ours and they would always have something good hearted and cheeky to say.

So what happened? For us it was Tesco’s opening a supermarket in a bigger town 12 miles away. It became a weekly ritual on a Thursday early evening: We would pick up the maternal grandparents and do a “weekly” shop. Back then petrol was “cheap” and it was a bit of an adventure; especially as there was a toy shop a few doors down and the grandparents were along! I can also remember the adults commenting on the wide variety of products available (they had all experienced wartime austerity) and how much the prices were so much lower than in the smaller specialist shops back home.

I guess we traded quality, food safety, and the value of those who brought produce to our table for convenience, saving a few quid and the dream of having the culinary world laid out at our feet.

Yes I do still shop in supermarkets; they are a hard habit to kick. However I’m thrilled at the rise and rise of the passionate food artisans that are now to be found increasingly holding weekly markets, helping to resurrect the high street and contribute positive pressure on the major retailers. I believe that a balance is to be found; a visit across the channel to any French provincial town will demonstrate this. I’m not a food snob: I can be found eating a McDonald’s occasionally and I'm also able to appreciate the finest cuisine. I love food not pretence. However if I’m about to part with a large wedge of my hard earned for a top notch meal, I don’t want the Chef to rely on a supermarket or national catering company for his ingredients. I want him to also love food: To know the local producers, to support their enterprises, to work with them to improve quality, to know what is and what is not locally in season and to cook with subsequent authenticity.

The pictures in this blog come from the grounds at Fallowfields in Oxfordshire. The owner; Anthony Lloyd has been the instigator of producing very local food for the tables in Chef Matt Weedons restaurant. Matt is now the farm manager and he gets to be hands on throughout the whole process. The garden and animals also add interest for guests and you can clearly see how well cared for the animals are. 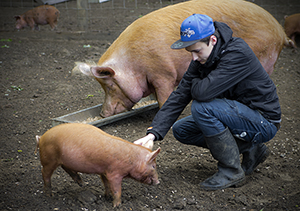 It’s interesting that as our children have grown up and flown the nest we too have found the time over the last three years to dig up part of the lawn and grow some of our own veg. I’m glad that we have. Shame we haven’t got enough room for a few pigs.

So take this as a call out to all of us who are genuinely passionate about food; grow and rear some of your own if you have the room, and if you don’t consider it an adventure to seek out quality local produce for your own table, or a restaurant with a passion for real food: Enjoy.


It’s popularity saw this colourful event moving to Victoria Park from it’s previous 14 year Weavers Field venue, near in 2013. There were an estimated 275,000 visitors coming together to sample all that is Bangladeshi at this New Year (Boishaki) celebration. Indeed it’s the biggest event of it’s kind outside of and only Notting Hill Carnival attracts more people in .

I’ll be honest and say that I don’t truly understand and therefore appreciate Asian signing and dancing although a large very enthusiastic crowd certainly seemed to do so in front of the main event stage. What brought me here was the energy, vibrancy, colour and large choice of food available: If there was one food stall there was a hundred! 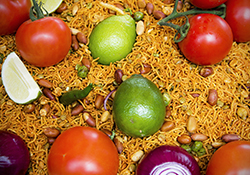 The food varied from the usual suspects to immature coconuts, know as Jelly nuts that you simply lop part the top off, insert a straw and drink. Apparently the “milk” is far more refreshing when they are young.

I passed on the coconuts and settled on a more obvious choice; a chicken and a lamb samosa made and cooked on the stall by the vendor’s mother and a biryani. The samosas were hot, crisp and well spiced and the biryani filling if not a little mysterious. I went for the vaguely titled “meat” version as a contrast to the chicken one that my son chose. I say mysterious as I could clearly ascertain beef and lamb but couldn't identify the third meat present. I’d take a guess that it was goat? Either way if you don’t like your meat cooked on the bone this would not be the choice for you. It was however well cooked. It was a weekend for exotic meats having sampled both a kangaroo and a springbok burger on Saturday at the much loved Borough Food Market that has grown significantly since my last visit a few months ago. Kangaroo is certainly interesting and a little gamey, however my palate was hard pushed to detect much difference to beef when it came to the springbok. 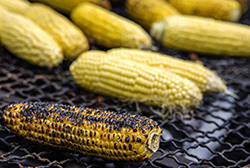 Apart from the food there were many stalls full of bling; beautiful bright women’s clothing finished with a myriad of sequins and beads and an astounding choice of big, brash costume jewellery. We didn't buy anything but each of us came away with a selection of sweets, 2 cans of Rubicon and a kg of Tolly Boy Rice…all free. What’s not to like about this event? 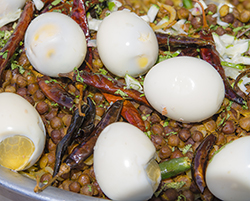 On the subject of Mela’s don’t miss the local Swindon Mela on Saturday 24th August 2013. No doubt I’ll also be blogging about it here.

Further images may be found on the Revealing Light website.

All images and text copyright Andrew Hill 2013
Posted by Revealing Light Photography at 12:07 No comments:

The Fox at Peasemore, Berks

Thursday 2nd May and what a fabulous day for a drive out into the countryside to the picturesque village of Peasemore: Perhaps spring is finally here?
I arrive at “The Fox at Peasemore” late morning greeted by the site of a gleaming white building basking beneath a deep blue almost cloudless sky. I’m a few minutes early so park up and choose to use the time to do a quick recon of the exterior. As I walk around the pub I guess I must have looked lost as the tradesman putting a few finishing touches to the rear of the building asks if he can help me. I explain who I am and in that age old tradition of banter between photographer and bystander get the line “if I’d have known you would have been here today I’d have smarted up”.

The Fox, or as it was; “The Fox and Hounds” had been shut down for sometime even before the new owners: Philip and Lauren Davison began their renovation resulting in its reopening back in mid March of this year. I enter and meet Angie at the bar who has followed Phil and Lauren from their last business; The Sun in the Wood near Newbury. My first impression of the team is warm, friendly and professional.

Angie fetches Phil. He is welcoming and unassuming yet you get the notion that he is a highly focused entrepreneur who knows what he is about, where he is going and how to get there. Indeed the accolades that he has picked up in his past 28 years of running his own businesses would bear witness: Wine pub of the year, customer service pub of the year, marketing pub of the year (3 times) and Phil’s appointment as BII national licensee of the year in 2009.

Phil gives me the official tour and introduces me to his delightful wife; Lauren and the kitchen staff; Thierry and Sean. We have a chat about the shoot and agree on what Phil wants me to cover and it’s then time to set up the lighting for the food shots.

We are going to image a mix of starters, mains and desserts from Thierry’s kitchen. Thierry has been with the team for 18 months having also been at The Sun. He is a quiet thoughtful man and you can always tell if a chef is good to work alongside by the enthusiasm of his number two: Sean. Indeed Sean is the ying to Thierry’s yang; young and chatty and clearly seems to enjoy his role in the team.

Thierry’s food is not what you would expect from a country pub. Although it is relatively simple and unassuming the ingredients are top notch and the preparation and presentation are more often to be found in a fine dining restaurant. Definitely worth the drive out into the countryside for.

Food shots completed I shoot the team next as Angie has to be off to pick up her children from school. Then it’s a solo effort to capture the ambiance of the tastefully restored interior and exterior. Indeed changing the outside from yellow to white was an excellent call and the interior retains the feel of a traditional pub while utilising modern soft furnishings. I wonder if Lauren has been at work here as she tells me that she has a passion for design, exemplified through flower arranging. There are always fresh flowers to be found on the bar.

Phil’s experience and expertise is in demand elsewhere amongst publicans who understand the power of marketing as a tool to keep in touch with customers and increase their sales and bottom line. Indeed Phil’s approach increased the turnover at his previous venture fivefold. He consequently runs a consultancy:
Pub Marketing Circle Ltd.

I am sure that The Fox at Peasemore will be a great success for all concerned, including the local villagers who now have a pub back in the village. After just 7 weeks of opening the evenings, especially weekends, in the restaurant are largely booked out.

More and larger Images may be found on the Revealing Light website.


Posted by Revealing Light Photography at 16:11 No comments: