1998 and Sheffield City Council (SCC) now has ’s largest listed building as its responsibility. English Heritage listed it Grade2* on the basis of:

The council was left with little choice but to be able to establish a redevelopment plan and by the end of 2003 people were being moved out of north block Park Hill, the part overlooking the city.

SCC wanted to maintain a “social housing” element within any redevelopment so, while realising the reality of the requirement for private sector investment, it eventually selected a partnership in 2004 to take things forward. The partnership consisted of A Registered Social Landlord: Parkway Housing (a subsidiary of The Manchester Methodist Housing Group) and the residential “redeveloper”: Urban Splash.

By 2006 Urban Splash made an application for outline planning permission to redevelop the site to offer a mix of apartments for; sale (approx. 580), rent and low cost ownership. The site to also have a mix of leisure and retail facilitates; a nursery, doctor’s surgery and landscaped open spaces. 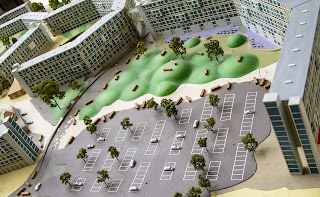 At this time approval was granted for 257 flats for sale, 56 flats for rent & 12 flats for shared ownership with the inclusion of the  GPs’ surgery, a nursery, retail and leisure facilities and “high quality public realm”.

The majority of the funding was to come from Urban Splash, with the remainder coming from a conglomerate of government and private housing agencies including the original partner: Parkway Housing (Manchester Methodist Housing Group). English Heritage made a grant towards specialist concrete repairs. 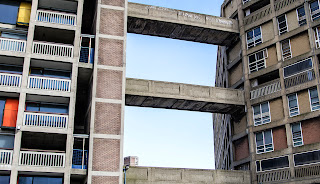 Preparation work on the site began in November 2007: Stripping out the flats, removing windows and brick infill panels, eventually taking the building right back to its core “H” frame structure. In 2010 the bright coloured anodised aluminium infill panels, that now make the new development “stand out”, were starting to be installed, their colours chosen to mimic the brick they had replaced. 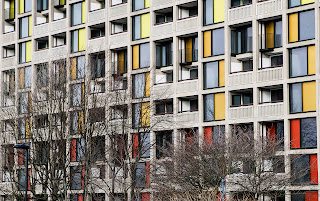 Next Part: Brutalist : The Rebirth of Park Hill – Now & Beyond
Posted by Revealing Light Photography at 15:21